Religion and reason: The challenges of modernity

Religious scriptures are the most revered pieces of writing. They have been recited millions upon millions of times and raging debates have been carried out to determine the one true meaning behind their allegories and metaphors. Two schools of thought emerged as a result of this battle of semantics. One school which has been dominant … Continue reading →

If you ask any Jew in Israel, “Who gave you Palestine?” [They have all programmed themselves with the idea of Genesis 17:8] Without the slightest hesitation every Jew will reply ‘GOD!’ That it was God Almighty who had given Palestine, to the Jews. But over 75% of the Israeli Jews if questioned “Do you believe in God?” They … Continue reading →

Christian Zionists believe that in order to fulfill Biblical prophecy, Israel must conquer most of the Middle East. They are a growing force in American politics with ties to many powerful pro-Israel groups in Washington. Once considered a marginal doctrine among evangelicals, the dispensationalist theology of Christian Zionism includes a belief in the rapture, when … Continue reading →

Concept of Equality of Men & Women in Islam

“O Mankind! Be conscious of your Sustainer, who has created you out of one living entity, and out of it created its mate, and out of the two spread abroad a multitude of men and women. And remain conscious of God, in whose name you demand (your rights) from one another, and of these ties … Continue reading →

There are an estimated five million Muslims in France today, which is the largest such population in Western Europe. What challenges have generations of Muslim immigrants in France been facing to retain their cultural identity? Read more >>>> http://wp.me/p1dL2Q-gc Please visit: http://aftabkhan.blog.com

How Islamic Inventors Changed the World

From coffee to cheques and the three-course meal, the Muslim world has given us many innovations that we in the West take for granted. Here are 20 of their most influential innovations: (1) The story goes that an Arab named Khalid was tending his goats in the Kaffa region of southern Ethiopia, when he noticed … Continue reading →

Hinduism,Judaism,Christianity or ISLAM Approved by God or not?

This quatrain sums up Iqbal’s supreme significance for Muslims, for then and for centuries beyond. After all, men like Iqbal are born but in centuries. To quote Amir Shakib Arsalan, the world of Islam had not thrown up a thinker of his calibre during the last few centuries. Iqbal had ample opportunities to assimilate eastern … Continue reading →

False Attacks on Islam and Muslims

Quran Magazine: http://flip.it/RvuUS The coherence in Qur’an is amazing that it give evidence to its Divine origin through ‘Internal Evidence’.  The Scientific Facts-Proven Recently: God says: “Then proclaim: “Praise be to GOD, very soon He will show you His signs and you will recognize them. Your Lord is not unaware of what you do.”(Qur’an;27:93); “Soon shall … Continue reading → 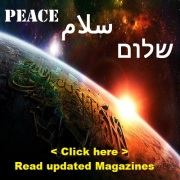